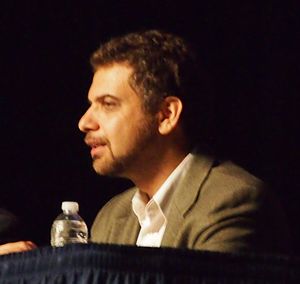 Who is Raed Jarrar?

Raed Jarrar is an Arab-American architect, blogger, and political advocate based in the U.S. Capital Washington, DC. He is the Communications Director and Spokesperson of the American-Arab Anti-Discrimination Committee.

While attending the University of Baghdad, he met the fellow architecture student later known as Salam Pax.

Jarrar first gained prominence as the person referenced in the title of the blog "Where is Raed?", written and maintained by Salam Pax, to which Jarrar himself made infrequent posts. This blog received widespread media coverage during the 2003 invasion of Iraq and afterwards.

Jarrar, along with his family, compiled their blogs into The Iraq War Blog, An Iraqi Family's Inside View of the First Year of the Occupation, which was published in June 2008. The book explores, through their words, how their lives were affected as terrorist activities, as well as the American military and coalition allies response, devastated the city. They persevered through night attacks and daytime missile strikes that often wreaked destruction to their home by blowing doors off hinges and breaking windows. The Jarrar family, while chronicling their daily lives amid the destruction, also provides descriptive analysis of the political climate that resulted from the American occupation of the country.

Discuss this Raed Jarrar biography with the community: