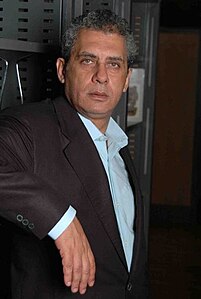 Who is Rageh Daoud?

Rageh Samy Daoud is an Egyptian composer of contemporary classical music. He is a member of that nation's third generation of such composers.

He is also a pianist and music professor, and has composed score for several Egyptian films. He began his studies at the Cairo Conservatoire at the age of nine, later studying composition there with Gamal Abdel-Rahim, graduating in 1977. He also studied piano at the Conservatoire with E. Puglisi.

He has composed for piano, voice, and orchestra, and has composed a number of film scores. cal education early, when he joined the Cairo Conservatoire at the age of nine, studying piano. Later he joined the class of Etore Puglisi at the higher stage. While continuing his piano studies with him, he also attended the composition class which the late Carnal Abdel-Rahim had founded in the Conservatoire, where he studied with him composition, the theory of traditional Arab modes and contemporary composition.

In 1977 Rageh Daoud obtained his diploma in musical composition from the Conservatoire with honors.

Discuss this Rageh Daoud biography with the community: