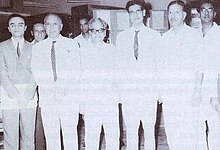 Who was Muhammad Raziuddin Siddiqui?

Muhammad Raziuddin Siddiqui, FPAS, NI, HI, SI, Ph.D., also known as Dr. Razi, was an eminent Pakistani theoretical physicist and a renowned mathematician who played an instrumental and an influential role in Pakistan's education system and Pakistan's integrated nuclear detterence development. An educationist and a scientist, Siddiqui had established numerous educational research institutes and universities in his country.

During the 1940s in Europe, he had made important and advance contributions in mathematical physics as well as work on the theory of relativity, nuclear energy, and the Quantum gravity. Siddiqui was an eminent and prominent educationist of Pakistan who dedicated his life for physics and mathematics in his country. An avid supporter of Science in Pakistan, Siddiqui attended various conferences for physics, mathematics, and science in Pakistan and abroad.

He had been the Vice-Chancellor of four Pakistan universities and the first V.Chancellor of Quaid-e-Azam University and served as the Emeritus professor of Physics there until his death in 1998.

Discuss this Muhammad Raziuddin Siddiqui biography with the community: