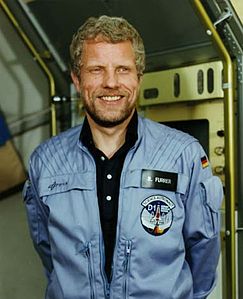 Who was Reinhard Furrer?

Furrer was born in Wörgl, Austria. After the end of World War II, his father was expelled from Austria. The family found a new home in Kempten im Allgäu, Bavaria. Furrer stayed there until he joined the University of Kiel to study physics. He later transferred to the Free University of Berlin, where he received a diploma in 1969, and a doctorate in 1972. During his time as a student in Berlin, he was involved in the building of the 145 m long "Tunnel 57" below the Berlin Wall, which was the escape route of 57 people from East Berlin to the West.

In 1974 he became assistant professor in Stuttgart and in 1979 qualified for full professorship. He spent time during 1980-1981 at the University of Chicago and during 1981 at the Argonne National Laboratory in Chicago, USA.

In 1977 Furrer applied for selection as an astronaut for the first Spacelab mission. He made it into the final round of candidates, although Ulf Merbold was finally selected. In 1982, the astronauts for the first German Spacelab mission were selected from the finalists for the first mission, and Furrer was one of the two chosen. He was a payload specialist on STS-61-A, which was launched October 30, 1985. The other payload specialists on the flight were Ernst Messerschmid and Wubbo Ockels.

Discuss this Reinhard Furrer biography with the community: