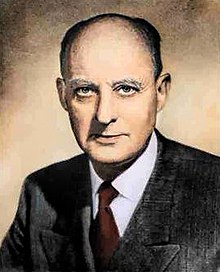 Who was Reinhold Niebuhr?

Karl Paul Reinhold Niebuhr was an American theologian, ethicist, public intellectual, commentator on politics and public affairs, and professor at Union Theological Seminary for more than 30 years. The brother of another prominent theological ethicist, H. Richard Niebuhr, he is also known for authoring the Serenity Prayer, and received the Presidential Medal of Freedom in 1964. Among his most influential books are Moral Man and Immoral Society and The Nature and Destiny of Man. Starting as a minister with working-class and labor class sympathies in the 1920s oriented to theological pacifism, he shifted to neo-orthodox realist theology in the 1930s and developed the theo-philosophical perspective known as Christian realism. He attacked utopianism as ineffectual for dealing with reality, writing in The Children of Light and the Children of Darkness:

Niebuhr's realism deepened after 1945 and led him to support American efforts to confront Soviet communism around the world. A powerful speaker, he was one of the most influential thinkers of the 1940s and 1950s in public affairs. Niebuhr battled with religious liberals over what he called their naïve views of the contradictions of human nature and the optimism of the Social Gospel, and battled with the religious conservatives over what he viewed as their naïve view of scripture and their narrow definition of "true religion". During this time he was viewed by many as the intellectual rival of John Dewey. Niebuhr was also one of the founders of Americans for Democratic Action and spent time at the Institute for Advanced Study in Princeton, New Jersey.

Discuss this Reinhold Niebuhr biography with the community: