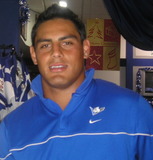 Reni Maitua is an Australian professional rugby league footballer with the Canterbury-Bankstown Bulldogs in the National Rugby League. An Australian and Samoan International representative player, he previously played for the Bulldogs RLFC, with whom he won the 2004 premiership. Maitua's position over time has varied between utility forward, backrow, lock forward, centre and he can also play five-eighth.

Discuss this Reni Maitua biography with the community: