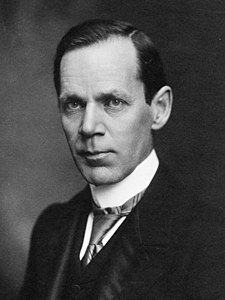 Who was Richard Cockburn Maclaurin?

Richard Cockburn Maclaurin was a Scottish-born U.S. educator and mathematical physicist. He was made president of MIT in 1909, and held the position until his death in 1920.

During his tenure as president of MIT, the Institute moved across the Charles River from Boston to its present campus in Cambridge. In Maclaurin's honor, the buildings that surround Killian Court on the oldest part of the campus are sometimes called the Maclaurin Buildings.

Earlier, he was a foundation professor of the then Victoria College of the University of New Zealand from 1899 to 1907. A collection of lecture theartres at the Kelburn campus of that university were named after him. He was also a professor at Columbia University from 1907 to 1908.

Discuss this Richard Cockburn Maclaurin biography with the community: