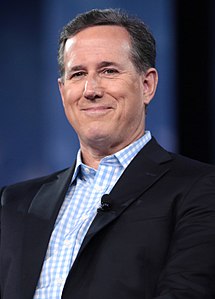 Who is Rick Santorum?

Richard John "Rick" Santorum is an American attorney and Republican Party politician. He served as a United States Senator representing Pennsylvania from 1995 to 2007, and was the Senate's third-ranking Republican from 2001 until 2007. He ran as a candidate for the 2012 Republican Party presidential nomination, finishing second to the eventual Republican nominee Mitt Romney.

Born in Virginia, Santorum was raised primarily in Butler, Pennsylvania. He obtained an undergraduate degree from Pennsylvania State University, an M.B.A. from the University of Pittsburgh, and a J.D. from the Dickinson School of Law. Santorum worked as an attorney at Kirkpatrick & Lockhart, where he met Karen Garver. They married in 1990, and have seven living children. Santorum was elected to the U.S. House of Representatives to represent Pennsylvania's 18th congressional district in 1990 and later became a member of a group dubbed the "Gang of Seven".

Santorum was elected as a United States Senator for Pennsylvania in 1994. He served two terms until losing his re-election bid in 2006. A devout, practicing Catholic, Santorum is a social conservative who opposes same-sex marriage and artificial birth control. While serving as a senator, Santorum was the author of what came to be known as the Santorum Amendment, which promoted the teaching of intelligent design. In 2005, Santorum introduced the Workplace Religious Freedom Act along with Senator John Kerry.

Discuss this Rick Santorum biography with the community: