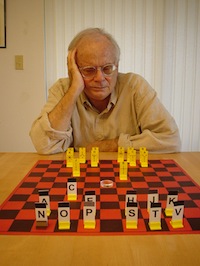 Who is Robert Abbott?

Robert Abbott is an American game inventor, sometimes referred to by fans as "The Official Grand Old Man of Card Games". Though early in his life he worked as a computer programmer with the IBM 360 assembly language, he has been designing games since the 1950s.

Two of his more popular creations include the chess variant Baroque chess and Crossings, which later became Epaminondas. Eleusis was also successful, appearing in several card game collections, such as Hoyle's Rules of Games and New Rules for Classic Games, among others. In 1963, Abbott himself released a publication, Abbott's New Card Games, which included instructions for all of his card games, in addition to Baroque chess. Abbott also invented logic mazes, the first of which appeared in Martin Gardner's Mathematical Games column in the October 1962 issue of Scientific American. One of the more prominent of these is Theseus and the Minotaur, which was originally published in the book Mad Mazes. His game Confusion was named "Best New Abstract Strategy Game" for 2012 by GAMES Magazine.

Discuss this Robert Abbott biography with the community: