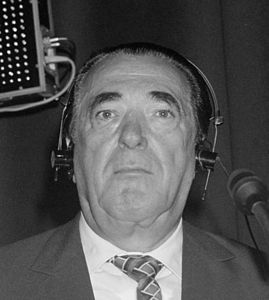 Who was Robert Maxwell?

Ian Robert Maxwell, MC was a Czechoslovakian-born British media proprietor and Member of Parliament. He rose from poverty to build an extensive publishing empire. His death revealed huge discrepancies in his companies' finances, including the Mirror Group pension fund, which Maxwell had fraudulently misappropriated.

He escaped from Nazi occupation, joining the Czechoslovak Army in exile in World War II and then fighting in the British Army where he was decorated. After the war he worked in publishing, building up Pergamon Press to a major publishing house. After six years as an MP during the 1960s, he again put all his energy into business, successively buying the British Printing Corporation, Mirror Group Newspapers and Macmillan, Inc, among other publishing companies.

He had a flamboyant lifestyle, living in Headington Hill Hall in Oxford from which he often flew in his helicopter, and sailing in his luxury yacht, the Lady Ghislaine. He was notably litigious and often embroiled in controversy, including about his support for Israel at the time of its War of Independence in 1948. In 1989, he had to sell successful businesses including Pergamon Press to cover some of his enormous debts, and in 1991 he was found dead, floating in the Atlantic Ocean having apparently fallen overboard from his yacht. He was given what amounted to a state funeral in Israel.

Discuss this Robert Maxwell biography with the community: