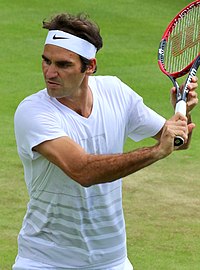 Who is Roger Federer?

Tennis player Roger Federer (IPA pronunciation: [ˈɹɑ.dʒər ˈfɛ.dər.ər]) (born August 8, 1981) is a Swiss tennis professional, currently ranked World No. 1. Many experts and many of his own tennis peers believe that Federer may be the greatest men's singles player of all time. Federer has won eleven Grand Slam men's singles titles in 33 appearances (all eleven coming in a record 17 consecutive appearances), three Tennis Masters Cup titles, and 14 ATP Masters Series titles. In 2004, the Swiss became the first man since 1988 to win three of four Grand Slam singles tournaments in the same year: the Australian Open, Wimbledon and U.S. Open. In 2006, he became the first and only male player to repeat this feat in the Open Era and also the first man in the Open Era to win at least ten singles tournaments in three consecutive years (2004 to 2006). He is also the only player ever to have won both the Wimbledon and U.S. Open singles titles in three consecutive years. In 2007, when he...

Discuss this Roger Federer biography with the community: