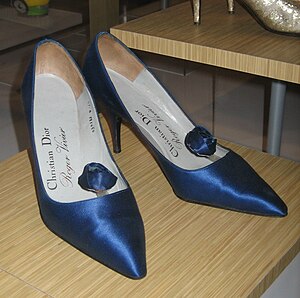 Who was Roger Vivier?

Roger Vivier was a French fashion designer who specialized in shoes. His best known creation was the Stiletto heel.

Vivier has been called the "Fragonard of the shoe" and his shoes "the Fabergé of Footwear" by numbers of critics. He designed extravagant richly-decorated shoes that he described as sculptures. He is credited with the design of the first stiletto heel in 1954. Stiletto heels, the very thin high heel, were certainly around in the late 19th century as numerous fetish drawings attest, but Vivier is known for reviving and developing this opulent style by using a thin rod of steel.

Ava Gardner, Gloria Guinness and The Beatles were all Vivier customers, and he designed the shoes for Queen Elizabeth II for her coronation in 1953.

Vivier designed shoes for Christian Dior from 1953 to 1963. In addition to the stiletto heel, he also experimented with other shapes including the comma. He used silk, pearls, beads, lace, appliqué and jewels to create unique decorations for his shoes.

In the 1960s Vivier also designed silk-satin knee boots outlined in jewels, and thigh-high evening boots in a black elastic knit with beads.

Discuss this Roger Vivier biography with the community: