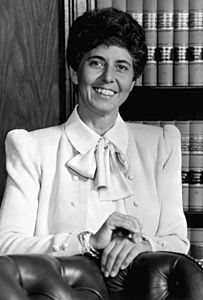 Who is Rosemary Barkett?

Rosemary Barkett is a Judge of the Iran – United States Claims Tribunal. Previously, she served as a United States Circuit Judge of the United States Court of Appeals for the Eleventh Circuit. Prior to her nomination for that post, she was Chief Justice of the Florida Supreme Court, where she was the first woman ever to serve on that court.

Discuss this Rosemary Barkett biography with the community: