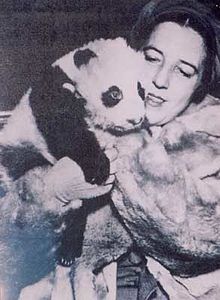 Who was Ruth Harkness?

Ruth Elizabeth Harkness was an American fashion designer and socialite, who traveled to China in 1936 and brought back the first live giant panda to the United States - not in a cage, or on a leash, but wrapped in her arms.

Harkness was born in Titusville, Pennsylvania. In 1934, her husband Bill Harkness had traveled to China in search of a panda, but died of throat cancer in Shanghai early in 1936. His widow Ruth, then living in New York, decided to complete the mission herself.

Harkness traveled to Shanghai, and with the help of a Chinese-American explorer named Quentin Young, and Gerald Russell, a British naturalist, launched her own panda mission. After passing through Chongqing and Chengdu, the team arrived at a mountainous region, there, on 9 November 1936, they encountered and captured a nine-week-old panda cub. The panda, which they named Su Lin after Young's sister-in-law, was bottle-fed baby formula on the journey back to Shanghai and the United States.

The panda caused a great sensation in the American press and eventually ended up at the Brookfield Zoo in Chicago.

Harkness brought back a second panda, Mei-Mei, before her death on July 20, 1947.

Discuss this Ruth Harkness biography with the community: