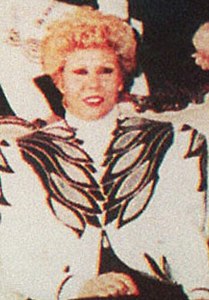 Teacher, Person Or Being In Fiction

Sajida Khairallah Talfah, is the widow of former Iraqi President Saddam Hussein, and mother of two sons and three daughters. She was born in 1937. She is the oldest daughter of Khairallah Talfah. She was played by Shohreh Aghdashloo in the BBC adaptation House of Saddam in 2008, in which her character played a major role.

Discuss this Sajida Talfah biography with the community: