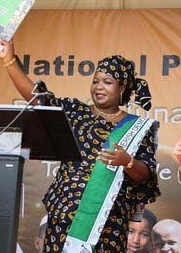 Who is Salma Kikwete?

Salma Kikwete is the 4th First Lady of Tanzania and the wife of Tanzanian President Jakaya Kikwete. She has served as the country's First Lady since December 2005.

Kikwete originally worked as a teacher for more than twenty years.

In 2005, the government launched a national campaign for voluntary HIV/AIDS testing in Dar es Salaam. Kikwete and her husband were among the first in the country to be tested. As of 2009, she was Vice President of the Eastern Region of the Organization of African First Ladies Against AIDS. In 2012, the First Lady Kikwete, former Botswana President Festus Mogae and ten other African figures partnered with UNESCO and UNAIDS to support the Eastern and Southern Africa Commitment on HIV Prevention and Sexual Health for Young People, which was launched in November 2011.

Kikwete also founded the Wanawake na Maendeleo, or Women in Development, a nonprofit which promotes developmemt among women and children.

Discuss this Salma Kikwete biography with the community: