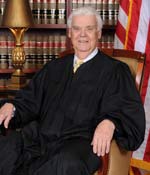 Sam A. Crow is a United States federal judge.

On November 24, 1981, Crow was nominated by President Ronald Reagan to a seat on the United States District Court for the District of Kansas vacated by Frank G. Theis. Crow was confirmed by the Senate on December 9, 1981, and received his commission on December 10, 1981. He assumed senior status on November 15, 1996.

Discuss this Sam A. Crow biography with the community: