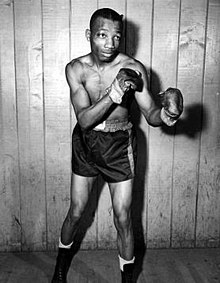 Who was Sandy Saddler?

Joseph "Sandy" Saddler was an American boxer born in Boston, Massachusetts. He was a two-time featherweight world champion, and also held the junior lightweight crown. Over his twelve-year career, Saddler scored 103 knockouts. He was stopped only once, in his second pro fight, by Jock Leslie. His final record was 144-16-2. In 2003, he was ranked #5 on Ring Magazine's list of 100 greatest punchers of all time.

Discuss this Sandy Saddler biography with the community: