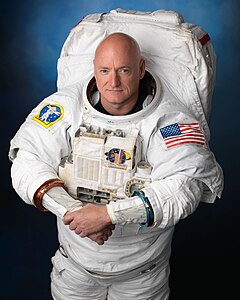 Who is Scott Kelly?

Scott Joseph Kelly is an American astronaut and a retired U.S. Navy Captain. A veteran of three previous missions, Kelly was selected in November 2012 for a special yearlong mission to the International Space Station set to begin in the spring of 2015.

Kelly was commander of the International Space Station Expedition 26. Kelly's identical twin brother, Mark Kelly, is also an astronaut. The Kelly brothers are the only siblings to have both traveled in space.

Kelly became a long-duration crewmember of ISS on October 9, 2010, after arriving on a Russian Soyuz spacecraft. He arrived at the station during Expedition 25, serving as a flight engineer. He took over command of the station on November 25, 2010, at the start of Expedition 26 which began officially when the spacecraft Soyuz TMA-19 undocked, carrying the previous commander of the station, Douglas H. Wheelock.

Discuss this Scott Kelly biography with the community: