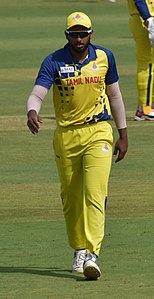 Who is Shahrukh Khan?

Shahrukh Khan, often credited as Shah Rukh Khan and informally referred as SRK and King khan, is an Indian film actor. Referred to in the media as "Badshah of Bollywood" or "King Khan", he has acted in 55 Hindi films in genres ranging from romantic dramas to action thrillers. His work in India's film industry have garnered him numerous achievements, including fourteen Filmfare Awards from thirty nominations. His eighth Filmfare Best Actor Award win made him the most awarded Bollywood actor of all time in that category, tied only with actor Dilip Kumar. He was awarded with the Padma Shri by the Government of India in 2005, and the Ordre des Arts et des Lettres by the Government of France in 2007 for his contribution to films.

Starting his career appearing in theatre and several television series' in the late 1980s, he later made his Hindi film debut in 1992 with Deewana. Early in his career, Khan was recognised for his unconventional choice of portraying negative roles in films such as Darr, Baazigar, and Anjaam. He later rose to prominence by playing a series of roles in romantic comedies or dramas like Dilwale Dulhaniya Le Jayenge, Dil To Pagal Hai, Kuch Kuch Hota Hai and Kabhi Khushi Kabhie Gham. The commercial success of these films earned him the tag of "the King of Romance". Khan then subsequently earned wide critical appreciation for his portrayal of a NASA scientist in Swades, a hockey coach in Chak De! India, and as the titular characters in Devdas and My Name Is Khan. Twelve of the films he has acted in, have accumulated gross earnings of over 100 crore worldwide, making him one of the most successful leading actors of Hindi cinema.

Discuss this Shahrukh Khan biography with the community: