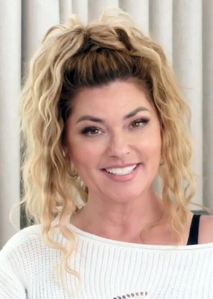 Who is Shania Twain?

Shania Twain, OC is a Canadian country pop singer-songwriter. Her 1995 album The Woman in Me brought her fame, and her 1997 album Come On Over became the best-selling studio album of all time by a female act in any genre and the best-selling country album of all time, selling over 40 million copies worldwide. Her fourth and last studio album to date, Up!, was released in November 2002 and has sold more than 20 million copies worldwide.

Twain has won 5 Grammy Awards and 27 BMI Songwriter awards. She has had three albums certified Diamond by the Recording Industry Association of America and is the second best-selling artist in Canada, behind Céline Dion, with three of her studio albums certified double diamond by the Canadian Recording Industry Association. She is the first female artist in history to have 3 consecutive albums reach diamond status, certified by the RIAA.

Sometimes referred to as "The Queen of Country Pop", she is one of the most commercially successful artists of all time, having sold over 80 million albums and is ranked 10th best-selling artist of the Nielsen SoundScan era. She was also ranked 72nd on Billboard's "Artists of the decade". Most recently, Twain has her own TV series, Why Not? with Shania Twain, that premiered on the OWN on May 8, 2011. She received a star on the Hollywood Walk of Fame on June 2, 2011.

Discuss this Shania Twain biography with the community: