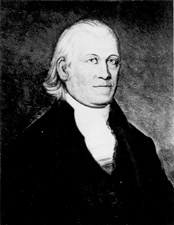 Who was Simeon Olcott?

Simeon Olcott was a United States Senator from New Hampshire. Born in Bolton, Connecticut Colony, he graduated from Yale College in 1761, studied law, was admitted to the bar and commenced practice in Charlestown, New Hampshire. He was a selectman from 1769 to 1771, a judge of probate for Cheshire County in 1773, and a representative in the general assembly of the Province, 1772–1773. He was appointed chief justice of the Court of Common Pleas in 1784, judge of the superior court in 1790, and chief judge of the court in 1795.

Olcott was elected as a Federalist to the U.S. Senate to fill the vacancy caused by the resignation of Samuel Livermore and served from June 17, 1801, to March 4, 1805. He died in Charlestown in 1815; interment was in Forest Hill Cemetery.

Discuss this Simeon Olcott biography with the community: