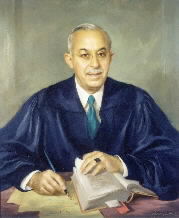 Sobeloff was born in Baltimore, Maryland to Jacob and Mary Hilda Sobeloff, who were Russian Jewish immigrants. Sobeloff attended public schools including Baltimore City College and the University of Maryland School of Law, where he received his LL.B. degree in 1915.

He served as a Page in the U.S. House of Representatives in 1910. He was admitted to the Maryland Bar in 1914, was a law clerk in Baltimore the same year, and subsequently went into private practice. From 1919 through 1924 he served as the assistant city solicitor for Baltimore and was appointed the deputy city solicitor for Baltimore from 1927 to 1931. In 1931 he became the U.S. Attorney for the District of Maryland, where he served until 1934. Subsequently, he was selected to be the Baltimore City Solicitor and the Special counsel to Baltimore City Housing Commission.

Discuss this Simon Sobeloff biography with the community: