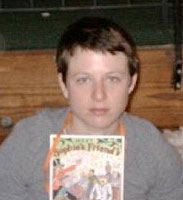 Who is Sophie Crumb?

Sophia Violet "Sophie" Crumb is an American-French comics artist. She is the daughter of underground comix artists Robert Crumb and Aline Kominsky-Crumb.

Crumb was born in Woodland, California and lived in the nearby farming town of Winters with her parents until she was nine years old. In 1991, she relocated with her family to Sauve, a village in Southern France. Her parents reported that they wanted to remove her from the political conservatives and Christian fundamentalists of the United States. In a 2010 interview, Sophie told The Philadelphia Inquirer that her mother was afraid Sophie would "turn into a Valley girl".

It was after this relocation that Terry Zwigoff released Crumb, a critically acclaimed documentary film about Sophie's father and their family. Zwigoff later commissioned Sophie to prepare some original drawings for inclusion in his 2001 comedy-drama, Ghost World, an adaptation of Daniel Clowes' comics serial of the same name.

After completing her secondary education in France, Crumb studied acrobatics and clowning at a French circus school. While living in Brooklyn in the mid-2000s she sold her comics on the street and apprenticed herself to a tattoo artist. At another stage she earned a living by teaching English as a foreign language.

Discuss this Sophie Crumb biography with the community: