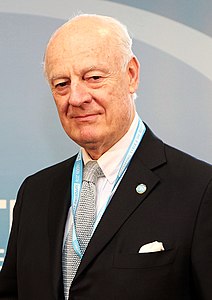 Who is Staffan de Mistura?

Staffan Domingo de Mistura is a long-serving Italian-Swedish diplomat and current member of the Italian government. After a 40 year career in various UN agencies, he was appointed Undersecretary of State for Foreign Affairs in the Italian cabinet headed by Mario Monti.

De Mistura’s previous UN posts have included that of Special Representative of the Secretary-General in Iraq and Afghanistan, Personal Representative of the Secretary-General for Southern Lebanon, and Director of the UN Information Center in Rome. His work has taken him to many of the World's most volatile trouble-spots including Afghanistan, Iraq, Lebanon, Rwanda, Somalia, Sudan and the former Yugoslavia.

Discuss this Staffan de Mistura biography with the community: