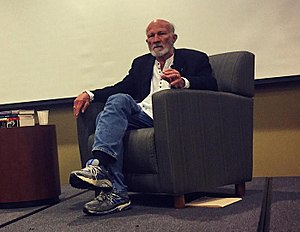 Who is Stanley Hauerwas?

Stanley Hauerwas is an American theologian, ethicist, and public intellectual. Hauerwas currently teaches at Duke University, serving as the Gilbert T. Rowe Professor of Theological Ethics at Duke Divinity School with a joint appointment at the Duke University School of Law. Before coming to Duke, Hauerwas was a longtime professor at the University of Notre Dame. He is considered by many to be one of the world's most influential living theologians and was named "America's Best Theologian" by Time Magazine in 2001. He was also the first American to deliver the prestigious Gifford Lectures in over forty years. His work is frequently read and debated by scholars in fields outside of religion, theology, or ethics, such as political philosophy, sociology, history, and literary theory. Hauerwas has achieved notability outside of academia as a public intellectual, even appearing on The Oprah Winfrey Show.

Though Hauerwas is most well known for his work related to Christian ethics, the relationship between Christianity and politics, and ecclesiology, Hauerwas has written widely on a diverse range of subjects, such as systematic theology, philosophical theology, political philosophy, the philosophy of social science, law, education, bioethics, and medical ethics. Hauerwas is known for his outspoken advocacy of pacifism, as well of his fierce criticism of liberal democracy, capitalism, militarism, American civil religion and both Christian fundamentalism and liberal Christianity. Among his most important contributions to modern theology are his advocacy of and work related to virtue ethics and postliberal theology.

Discuss this Stanley Hauerwas biography with the community: