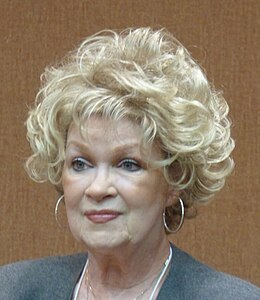 Who is Sue Raney?

Sue Raney is an American jazz singer. Signed by Capitol Records at the age of 17, her debut album, the Nelson Riddle-produced When Your Lover Has Gone, was released in 1958. Raney begin singing at only four years of age, and encouraged by her mother, began working as a professional before she was a teenager. When she was nearly 14, she joined Jack Carson's Los Angeles-based radio show in 1954, and later worked on television as Ray Anthony's band's main vocalist. After a hiatus in the 1970s, Raney has continued to record sporadically, with one of her most recent albums being a 2006 tribute to Doris Day entitled Heart's Desire.

Her Imperial single "Early Morning Blues And Greens" was well-played on easy-listening stations, peaking at No. 16 on Billboard's MOR chart. Raney is married to former Cubs/Red Sox player Carmen Fanzone.

She voiced Patti Bear in The Great Bear Scare, an animated Halloween sequel to The Bear Who Slept Through Christmas.

Discuss this Sue Raney biography with the community: