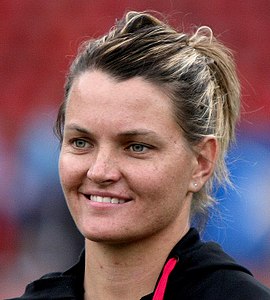 Sunette Stella Viljoen is a South African javelin thrower, who has won gold at the Commonwealth Games and African Championships. She also made one Women's Test cricket and 17 Women's One Day International appearances for South Africa between 2000 and 2002.

She won gold at the 2009 Summer Universiade in Belgrade, throwing 62.52 metres. At the qualifying round she set a new African record 65.46 metres, eclipsing her compatriot Justine Robbeson's record 63.49m achieved in Potchefstroom in February 2008. Viljoen's throw was over three meters further than her previous PB of 62.24 m achieved also at the February 2008 meeting in Potchefstroom. On 14 June 2010 she broke her own record with 66.38 m at the Josef Odložil Memorial in Prague.

She went on to win bronze at the IAAF World Championships in Daegu, Korea on 2 September 2011. With a throw of 68.38m, she also set a new African Record.

Again on 9 June 2012 she improved her own African record to 69.35m at the Adidas Grand Prix in New York City.

Discuss this Sunette Viljoen biography with the community: