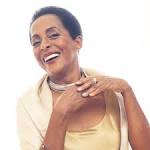 Who is Susana Baca?

Susana Esther Baca de la Colina is a prominent Peruvian singer-songwriter; two-times Latin Grammy Award winner. She has been a key figure in the revival of Afro-Peruvian music.

In July 2011, she was named Peru's Minister of Culture in the Ollanta Humala government. becoming the second Afro-Peruvian cabinet minister in the history of independent Peru.

Discuss this Susana Baca biography with the community: