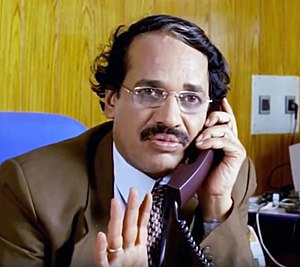 T N Seetharam or Gouribidanur Seetharam is a prominent Kannada film and TV serial director, actor and writer. He has become a cultural icon in Karnataka, India, through his work in several art mediums. Mr. Seetharam has written, directed, and produced plays, movies, and top-rated television series which have attracted millions of viewers.

T.N. Seetharama was associated with the famous director Puttanna Kanagal and had written scripts for his movies. He also has made appearances as an actor in movies. He was noticed when he started directing TV serials for Doordarshan. Fame and recognition came when he directed Mayamruga, a daily Kannada serial which stood apart for its take on reality. Mayamruga has seen a DVD avatar, which probably is the first for a Kannada serial. He then went on to direct Kamanabillu which was the first serial on a satellite TV to be widely watched. The most successful phase for him has been his association with ETV Kannada which resulted in famous serials like Manvantara and Muktha. He has acted in most of his serials and he likes to play the character of a lawyer who comes to the rescue of the oppressed. Mr Seetharam is strong in his scripts which makes him quickly change the course of a serial and deliver what the audience demand. Usually the ratings soar when he makes an appearance. The court scenes are elaborate and goes on for weeks together and yet the audience ask for more. That's the power and charm of Seetharam. He developed a concept of Samvada, an organised meeting with the audience of his serials throughout the length and breadth of Karnataka. These became so popular that ETV Kannada telecast these interactions which had an equal ratings as that of the serial.

Discuss this T. N. Seetharam biography with the community: