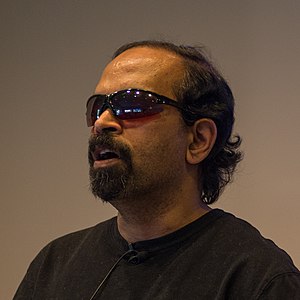 T. V. Raman is a computer scientist who specializes in accessibility research. His research interests are primarily in the areas of auditory user interfaces and structured electronic documents. He has worked on speech interaction and markup technologies in the context of the World Wide Web at Digital's Cambridge Research Lab, Adobe Systems and IBM Research. He currently works at Google Research. Raman has himself been partially sighted since birth, and blind since the age of 14.

He grew up in Pune, India.

Raman became blind at the age of 14 due to glaucoma, being previously partially sighted and able to see with his left eye. To deal with his blindness he had his brother, his mentors, and his aide read out textbooks and problems to him. Although unable to see, he was able to solve Rubik's Cube with a braille version, write computer programs, and perform mathematics.

Raman attended the University of Pune with a BA in mathematics, IIT Bombay with a MSc in computer science, and Cornell University earning a MS in computer science and a PhD in applied mathematics. His PhD thesis entitled "Audio System For Technical Readings" was awarded the ACM Doctoral Dissertation Award in 1994. Recently Raman has incorporated these features in chrome browser. Raman went on to apply the ideas on audio formatting introduced in AsTeR to the more general domain of computer interfaces Emacspeak. On April 12, 1999, Emacspeak became part of the Smithsonian's Permanent Research Collection on Information Technology at the Smithsonian's National Museum of American History. In 2005 he began work at Google.

Discuss this T. V. Raman biography with the community: