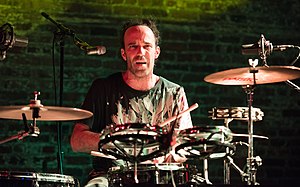 Who is Tamir Muskat?

Tamir Muskat is an Israeli musician/producer-sound engineer who was born and raised in Petach Tikva, Israel as son of a Romanian immigrant. His father was the manager of Anzeagi Conservatorion for music in Petach Tikva. As a teenager, he was already a prominent rock drummer and percussionist. Early on, Tamir started producing Israel's first thrash metal records in his basement studio but also began working with Sephardic Eastern singers of Greek and Turkish origin in a highly-ornamented style that is Middle Eastern in nature.

Tamir moved to the United States in 1995 and joined the band Izabo. In 1996, Tamir joined the internationally acclaimed band Firewater as a drummer and producer. With Firewater, he toured the world and made three albums, two of which he produced. Tamir founded Vibromonk Records with Dan Shatzky, which has become an important music production studio in New York City. Since then Tamir has produced albums with exceptional artists from around the world, and has helped create a unique musical palette.

Discuss this Tamir Muskat biography with the community: