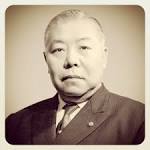 Who was Taro Takemi?

Takemi Taro received his university education at Keio University, and was noted as among the first to study the application of nuclear physics to medicine. He built the first portable electrocardiograph in 1937 and is also known for his invention of the vectorcardiograph in 1939.

Also a brilliant researcher, he patented several laboratory processes, and was a member of the research and survey team which investigated effects of the atomic bombing of Hiroshima in 1945. He served as a visiting professor at Keio, Kitasato, and Tokai universities, and advised the Japan Science and Technology Agency. In 1982, Takemi Taro was appointed a visiting professor at the Harvard School of Public Health, but was unable to fulfill the commitment due to illness. He died in Tokyo in December 1983.

Discuss this Taro Takemi biography with the community: