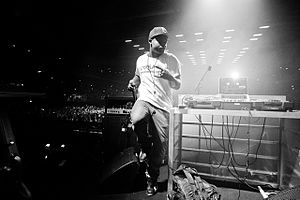 Who is Taylor James?

Taylor Austin James, better known as DJ Tay James, is an American DJ and MC. He was signed to Unruly Records in 2005, and after several years playing clubs in the Washington D.C. and Baltimore area began touring as Justin Bieber's DJ and MC in 2009. He has released a number of mixtapes, and as of 2012 is a radio DJ on WPGC-FM.

Discuss this Taylor James biography with the community: