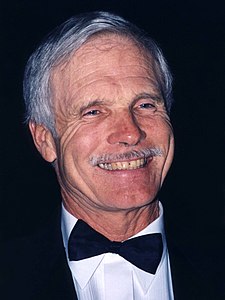 Who is Ted Turner?

Turner's media empire began with his father's billboard business, which he took over at 24 after his father's suicide. The business, Turner Outdoor Advertising, was worth $1 million when Turner took it over in 1963. Purchase of an Atlanta UHF station in 1970 began the Turner Broadcasting System. Cable News Network revolutionized news media, covering the Space Shuttle Challenger disaster in 1986 and the Persian Gulf War in 1991. Turner turned the Atlanta Braves baseball team into a nationally popular franchise and launched the charitable Goodwill Games. He helped reinvent interest in professional wrestling when he owned one of the most popular wrestling companies of the middle to late 1990s known as World Championship Wrestling. The Monday night show that it put on was the highest rated on cable and helped boost Turner's channels of TNT and WTBS.

Discuss this Ted Turner biography with the community: