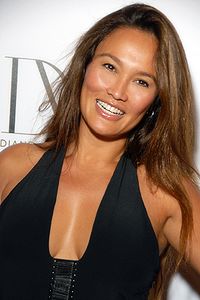 Who is Tia Carrere?

Tia Carrere is an American actress, model, voice artist, and singer who obtained her first big break as a regular on the daytime soap opera General Hospital.

She is most widely known for her roles as Cassandra Wong in the feature films Wayne's World and Wayne's World 2, as Nani in Lilo & Stitch, its sequel films and Lilo & Stitch: The Series, as Queen Tyr'ahnee in Duck Dodgers, and as Sydney Fox in the syndicated television series Relic Hunter, and for her participations as a contestant in the second season of the United States version of Dancing with the Stars and the fifth season of The Celebrity Apprentice.

Discuss this Tia Carrere biography with the community: