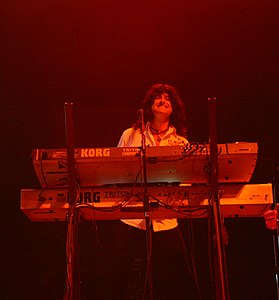 Who is Timothy Drury?

Timothy Drury is an American keyboardist, guitarist and vocalist. He was the keyboard player in rock band Whitesnake up until September 2010. He is the son of actor James Drury.

He got his big break-through when he was asked to play keyboards on Don Henley's End of the Innocence tour in 1989. Since that time he has been touring with famous musicians and bands such as the Eagles, Don Felder, Bryan Adams, Melissa Etheridge and Stevie Nicks. He co-wrote Don Henley's single, "Everything is Different Now", and co-wrote a song on Stevie Nicks record, "That Made Me Stronger", which was produced by his Henley touring mate, Sheryl Crow.

Drury toured as a member of Whitesnake on their extensive world tour to promote their record, "Good To Be Bad". He performed on their latest 2011 album Forevermore.

Drury is currently touring as keyboardist for Don Felder. Drury performed on Felder's latest record Road to Forever. He co-wrote 8 songs on the album, including the single Wash Away, with Felder, Styx's Tommy Shaw and Matt Bissonette.

Other notable projects include film and television music composing and the collaborative creation of an opera with Jon Anderson, lead singer of the band Yes.

Discuss this Timothy Drury biography with the community: