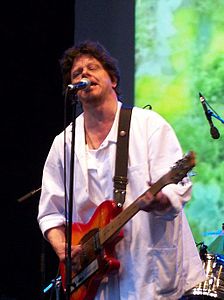 Who is Tom Liwa?

Tom Liwa is a German singer-songwriter who has been performing as a solo artist in addition to being a founding member and frontman of the band Flowerpornoes. While his artistic solo output long went unnoticed by German mainstream news sources and radio stations, he was recognised early on for his work with the band. In recent years, he has been receiving increased attention due both to a steady fan-base and various collaborations and contributions, e.g. to Klee's 2006 album Zwischen Himmel und Erde. Liwa has cited Joni Mitchell's Hejira as one of his favourite albums and as a major musical influence, and has named Neil Young as an early idol.

Discuss this Tom Liwa biography with the community: