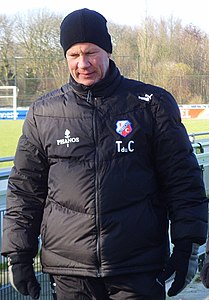 Who is Ton du Chatinier?

Du Chatinier was born in Utrecht. During his professional career, he played as a defender. At FC Utrecht Du Chatinier took over as a head coach from Willem van Hanegem at the end of 2008, and parted company at the end of the 2010–11 season.

Discuss this Ton du Chatinier biography with the community: