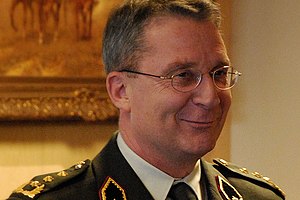 Who is Ton van Loon?

Ton van Loon is a commander from the Netherlands. He is a Lieutenant General employed by NATO who took control of the International Security Assistance Force, Regional Command South on November 1, 2006 until May 1, 2007. From April 13, 2010 until September 25, 2013, he commanded I. German/Dutch Corps. He is married and has two children.

Discuss this Ton van Loon biography with the community: