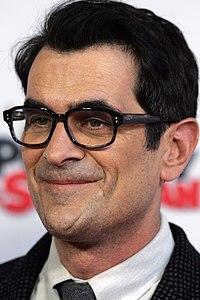 Who is Ty Burrell?

Tyler Gerald "Ty" Burrell is an American actor who is best known for his role as Phil Dunphy in the ABC comedy Modern Family, for which he has won a Primetime Emmy Award for Outstanding Supporting Actor in a Comedy Series in 2011 and has been nominated another three times so far.

Discuss this Ty Burrell biography with the community: