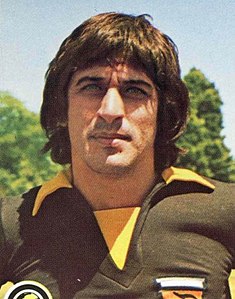 Who is Ubaldo Fillol?

Ubaldo Matildo Fillol, nicknamed el Pato, is an Argentine football coach and former goalkeeper. He took part in the 1974, 1978 and 1982 World Cups representing the Argentine national team. He also played in the South American qualifiers for the 1986 World Cup, but he was finally not chosen for the final team that played in Mexico.

In 1977 Fillol was awarded the Footballer of the Year of Argentina award, being the first goalkeeper ever to receive the distinction.

Discuss this Ubaldo Fillol biography with the community: