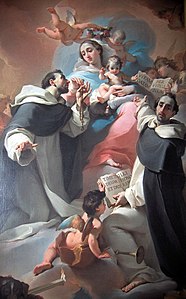 Who was Ubaldo Gandolfi?

Ubaldo Gandolfi was an Italian painter of the late-Baroque period, mainly active in and near Bologna.

He was born in San Matteo della Decima and enrolled by the age of 17 at the Clementine Academy, where he apprenticed with Ercole Graziani the Younger, Felice Torelli, and Ercole Lelli. He was from a large family of prolific artists, including his sons Giovanni Battista and Ubaldo Lorenzo, as well as his brother Gaetano and nephews Mauro, Democrito, and niece Clementina. Together, they are considered the last representative of the grand manner of painting characteristic of the Bolognese school, that had risen to prominence nearly two centuries earlier with the Carracci.

Gandolfi's work ranges from Baroque to Neoclassic styles, and specifically recalls the style of Ludovico Carracci. He completed, in 1770-75, a series of canvases on mythological narratives for the Palazzo Marescalchi in Bologna. He died in Ravenna in 1781.

Discuss this Ubaldo Gandolfi biography with the community: