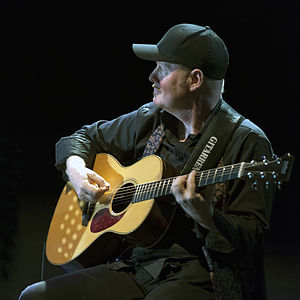 Ulf Karl Erik Wakenius is a Swedish jazz guitarist. Wakenius was a member of the Oscar Peterson quartet from 1997. He was also a member of the Ray Brown trio. Wakenius also plays with his own band, and has recorded many albums.

In the 80s he played with Peter Almqvist in Guitars Unlimited playing, among other things, during the intermission for 600 million viewers of the Swedish International Finale of the Eurovision Song Contest in 1986. A stop in Rio de Janeiro resulted in three records with Sivuca Let's Vamos, Aquarela Do Brazil and Rendez-Vous in Rio. The cooperation with Niels-Henning Ørsted Pedersen also started this decade, and they also recorded This Is All I Ask and Those Who Were.

His Enchanted Moments was recorded with Lars Jansson piano, Lars Danielsson, bass and Raymond Karlsson drums. On Dig In he plays with Gösta Rundqvist piano, Yasuhito Mori bass and Jukkis Uotila drums. Live, The Guitar Artistry of U.W.. After that came Tokyo Blue with Carsten Dahl piano, Morten Lund drums and Yasuhito Mori bass; Forever you, with Carsten Dahl, piano, Morten Lund drums and Lars Danielsson bass; and Checkin' In His latest release, Notes from the Heart is a tribute to Keith Jarrett, with Lund and Johansson.

Discuss this Ulf Wakenius biography with the community: