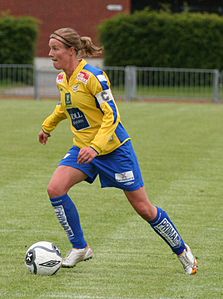 Who is Unni Lehn?

Unni Lehn is a Norwegian football midfielder. She has 133 appearances for Norway's national team. In 2000 Lehn played 86 minutes of the Olympic Final in Sydney, in which Norway beat the USA in extra time to take the Gold medal. She lives in Trondheim and played for Trondheims-Ørn from 1994 onwards, with over 400 appearances for the club during which they won the Norwegian league title and the Norwegian Cup competition several times. From 2001-3 she played in the USA with Carolina Courage. She announced her retirement from football at the end of 2007.

Unni Lehn has an economics degree and is continuing working at the BN Bank in Trondheim.

Discuss this Unni Lehn biography with the community: