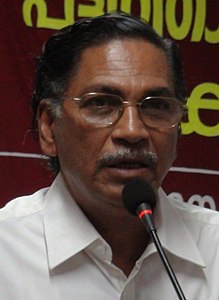 Who is V Madhusoodanan Nair?

V Madhusoodanan Nair is a famous Malayalam poet from Kerala, India, who was partly responsible for renewal and popularizing of poetry to the masses through recitation. He was born on 25 February 1949 at Aruviyodu near the river Neyyar, Thiruvananthapuram Kerala. Madhusoodhanan Nair imbibed quite early the tradition of many a ritualistic song from K.Velayudhan Pillai, his father, who was a reciter of Thottam Pattu. He completed his Post Graduation in Malayalam literature from Trivandrum University College. Soon after securing his M.A., he had a brief stint in journalism before joining St. Xavier’s College, Thiruvananthapuram.

He took to writing poetry while at school and began publishing his pieces in 1980’s. His first collection “Naranathu Bhranthan’ was published in 1992. He is the recipient of the Kerala Sahithya Academy Award, Kunju Pillai Award and K. Balakrishnan Award.

He is well versed in Malayalam, English, Hindi, Sanskrit and Tamil. He has written and rendered lyrics for three Malayalam films and wrote lyrics for Tharangini and Manorama Music.

He now fully devotes his time to his literary works having retired from the College as the Professor and Head of the Department of Malayalam.

Discuss this V Madhusoodanan Nair biography with the community: