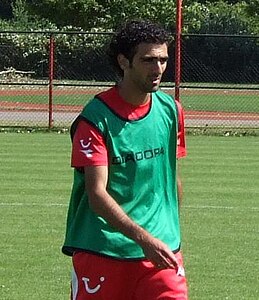 Vagif Javadov is an Azerbaijani footballer who has been playing as a striker for Azerbaijan Premier League club Inter Baku. He was voted Azerbaijani Footballer of the Year in 2009.

Javadov started playing football at age 7 and attended one of the local football schools under Vagif Pashayev. He joined CSKA’s youth system at 11, playing for the club’s youth and reserve teams as a striker. In 2007 he left CSKA Moscow and joined Qarabağ.

Born
May 25, 1989
Baku
Also known as
Nationality
Profession
Lived in

Discuss this Vagif Javadov biography with the community: