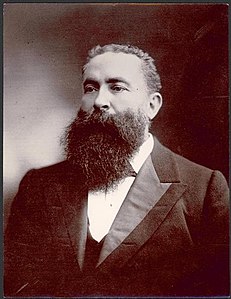 Vaiben Louis Solomon was the 21st Premier of South Australia and a member of the first Australian Commonwealth parliament.

Solomon was born in Adelaide, South Australia, the son of Judah Moss Solomon, a member of the South Australian Legislative Council and Lord Mayor of Adelaide from 1869 to 1870. After an education which began at J. L. Young's Adelaide Educational Institution before moving to Scotch College, Melbourne, the Jewish Solomon wished to marry Mary Wigzell, a gentile, but his father so opposed the marriage that Solomon left for the Northern Territory in 1873. There he became editor of the Northern Territory Times as well as holding successful mining and mercantile holdings. He mixed these interests in his 1894 book Guide to Western Australia and its goldfields. Additionally, on 6 December 1880, three months after his father's death, Solomon married Wigzell, now a widow with a young son. He became a prominent figure in the Northern Territory and gained the nickname "Black Solomon", derived from the time, on a dare, he painted himself black and walked naked through the streets of Palmerston.

Solomon was elected to the South Australian House of Assembly in April 1890 as an inaugural member for the Electoral district of Northern Territory on the back of a campaign advocating a White Australia policy. He served as Government Whip before becoming Leader of the Opposition in 1899, when he had the Charles Kingston government dissolve over Kingston’s proposal to extend suffrage to all householders and their wives. Solomon then became Premier and Treasurer of South Australia for one week, 1 December to 8 December 1899, before further machinations led to new Opposition Leader Frederick Holder gaining the Premiership.

Discuss this Vaiben Solomon biography with the community: