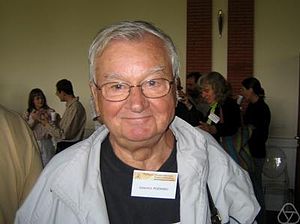 Valentin Alexandre Poénaru is a Professor of Mathematics at Université de Paris-Sud. He specializes in low-dimensional topology.

Born in Romania, he did his undergraduate studies at the University of Bucharest. In 1962, he was an invited speaker at the International Congress of Mathematicians in Stockholm, Sweden. While at the congress, Poénaru defected, subsequently leaving for France. He defended his Thèse d'État at the University of Paris on March 23, 1963. His dissertation topic was Sur les variétés tridimensionnelles ayant le type d'homotopie de la sphère S3, and was written under the supervision of Charles Ehresmann. After that, he went to the United States, spending four years at Harvard University and Princeton University. In 1967, he returned to France.

Poénaru has worked for several decades on a proof of the Poincaré conjecture, making a number of related breakthroughs. His first attempt at proving the conjecture dates from 1957. He has described his general approach over the years in different papers and conferences. On December 19, 2006, he posted a preprint to the arXiv, claiming to have finally completed the details of his approach and proven the conjecture.

Discuss this Valentin Poénaru biography with the community: