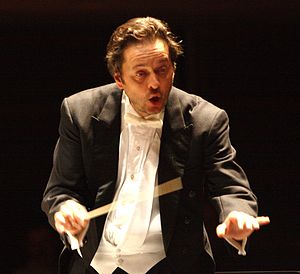 Who is Valentin Radu?

Valentin Radu is founder, artistic director and conductor of Vox Ama Deus, with performances at the Kimmel Center in Philadelphia and other various city, suburban, and Main Line area venues, has led numerous orchestras and vocal ensembles in Europe and the U.S., including the Hungarian National Philharmonic, Bucharest, Arad, Oradea Philharmonics, the Budapest Chamber Orchestra and the Romania National Radio Orchestra. In 1996 he conducted the Bucharest Philharmonic in Handel's Messiah, and in 1997 led the Romanian National Radio Orchestra in Handel's Acis and Galatea.

Discuss this Valentin Radu biography with the community: